Delivery Information
Follow us on
Now taking orders for this coming Father's Day! Sunday delivery available for the Perth metro area!
Home / Blog / Gift Giving / Proof that a way to a man’s heart is through his stomach Back to Blog List

We don’t know why, but men seem to be a heck of a lot harder to buy for than women. They either never want anything or their hobbies are so extreme that it’s near impossible to buy a simple Father’s Day gift or birthday present that they’ll love. 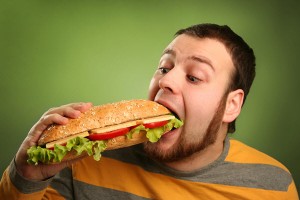 But there is one thing that a man no matter what will love. Heck they need it in order to live so they have to like it! The answer is food, glorious food.

Despite what you think, even though he doesn’t take a photo for Instagram of each and every meal, he no doubt still has cravings and desires for certain tasting treats. Everyone seems to have a favourite from Dad’s favourite Turkish delight, to the husband’s admiration of craft beer, to your brother and his gluten-free food love and of course there’s your mate who is an aspiring MasterChef and just loves to cook.

If you don’t believe us, below are 10 convincing facts which support why a way to a man’s heart is most definitely through his stomach:

So there you have it. Men love food and they’ll love you for giving them the gift of food! Here at Just In Time Gourmet we were let in on this little secret of male food love some time ago and we have put together a range of pre-designed hampers specifically for him as well as acquiring a number of products to go in your ‘create your own hamper’ for that bloke in your life.

That once hard to buy for man is now a synch to shop for, and you can do it all from the comfort of your couch in your pyjamas! Alternatively you can always splurge on one of our dinner kit hampers, like the Mamma Mia pasta hamper, and spoil him with a night of home-made cooking and copious amounts of his favourite beverage.

To make your online shopping experience for him even easier we have put some trusted suggestions below:

Still struggling for what to buy him for that special occasion? Give us a buzz on 1300 667 992 or contact us online and we’ll be happy to point you in the right direction.